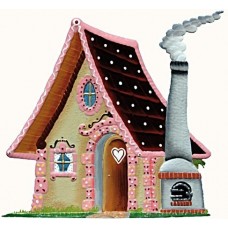 This darling witch's house is the cornerstone of the Hansel and Gretel fairytale. Delightfully decorated, it sets a bewitching scene!

Hansel and Gretel are the young children of a poor woodcutter. They have an evil step-mother who convinces the father to abandon the children in the woods as there is not enough food to feed the whole family.

Hansel, aware of the plan, leaves a trail of pebbles back to the house so he and his sister find their way back home. The step-mother is angry and locks the two children up for the night with only a loaf of bread and water.

The next night, the woodcutter attempts the same plan again; this time Hansel leaves a trail of bread-crumbs but they get eaten by hungry birds and the two children get lost in the woods.

After wandering around, Hansel and Gretel stumble across a house made of gingerbread and other confectionery. They are very hungry and begin to eat it.

It is owned by an evil old witch who lures them inside. She traps Hansel in a cage and forces Gretel to do the housework, continually sweeping the house. She feeds Hansel lots of food with the intention of eating him. Her eyesight is very bad so every day she feels his finger to see if he is fat enough, but he holds out a chicken bone instead of his real finger.

Eventually the witch decides to eat him anyway and turns on the oven. Gretel comes up behind her and kicks her into it, shuts the door firmly and padlocks it.

They hang around in the house for a couple of days eating the sweets and they find some valuable gold coins. Once they are convinced that the witch is completely burnt they successfully find their way home and are met by their ecstatic father. He tells them that his evil wife is dead and they are now rich because of the gold coins' value.

They all live happily ever after.

The original German version is almost exactly the same except that the mother is not evil and she sends the children into the wood to pick strawberries after they accidentally smash the pot holding the milk that shall be used to cook the bread for their dinner.

After they have gone out into the woods their father comes home and speaks of a witch that lives in the forest and eats children, the mother realizes what she has done and they go out to look for the kids.

The witch lures the children into her gingerbread house and she threatens to eat Gretel if she doesn't do as she is told while putting Hansel in a cage. The witch fires up the oven and force feeds Hansel sweets and chocolate to make him fat.

They then find that their mother and father are right outside the house and they all go home together.