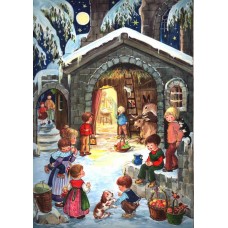 Product Code: a24
Availability: TEMPORARILY OUT OF STOCK
Price: $0.00

This delightfully illustrated nativity scene reminds us of the true meaning of Christmas. Watch as the village children gather around the manger in unique advent calendar.