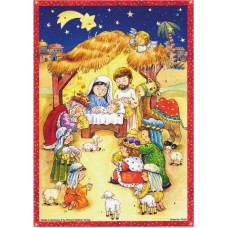 A charming nativity scene, this delightfully illustrated advent calendar is perfect for children and those young at heart.