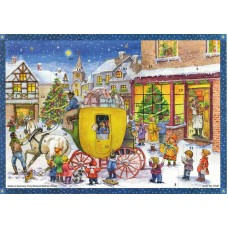 A charming scene of a stagecoach delivering gifts, things haven't changed too much since then!