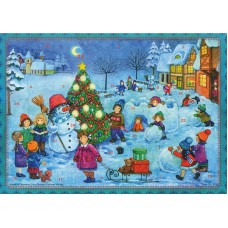 Nothing says winter like building a snowman! Bring the joy of this special holiday activity home with this darling advent calendar.