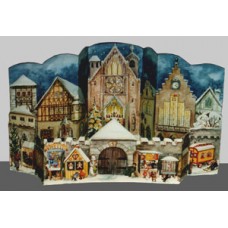 The free-standing Advent Calendars are attractive on every window
sill. Most of them are two-part with an additional front panel.
The Calendars aredie-cut - a wonderful Christmas decoration.
Normally the Calendars are decorated with silver glitter.

An Advent calendar is a special calendar which is used to count
or celebrate the days of Advent in anticipation of Christmas.
Some calendars are strictly religious, whereas others are secular in content.

Today, most advent calendars are made for children. Many take the
form of a large rectangular card with many "windows", one of which
is opened every day during Advent. In less elaborate calendars,
each window opens to reveal an image, a poem, or part of a story such
as the Nativity story itself. More elaborate Advent calendars have a
small gift concealed in each window, such as a toy or a chocolate item.

The origins of the Advent calendar come from German Lutherans who,
at least as early as the beginning of the 19th century, would count
down the 24 days of Advent physically. Often this meant simply drawing
a chalk line on the door each day, beginning on December first.
Some families had more elaborate means of marking the days, such as
lighting a new candle (perhaps the genesis of today's Advent wreath)
or hanging a little religious picture on the wall each day.