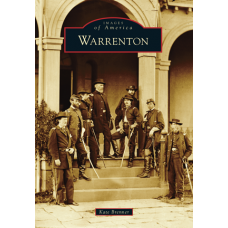 When Warrenton was founded in the 18th century, it was nothing more than a dusty road and watering hole. It served as a tavern and courthouse for weary travelers on the Falmouth-Winchester and Alexandria-Culpeper roads. As it grew and became the seat of Fauquier County, it was transformed into a magnet for judges and lawyers—many of whom shaped the country's government after the Revolutionary War. Almost a century later, Warrenton changed hands more than 60 times during the Civil War; it experienced Reconstruction and rose from the ashes after a great fire that wiped out almost half the town. Today, it has become an epicenter for equestrians, serving as home to foxhunters, the Virginia Gold Cup Steeplechase, and the Warrenton Horse Show. With vintage photographs, Warrenton beckons readers back in time, along the backdrop of beautiful 18th- and 19th-century architecture and estates, to remember the spirit of a bygone era that still paints the streets and colors the culture of the people who live there.

Printed in the USA