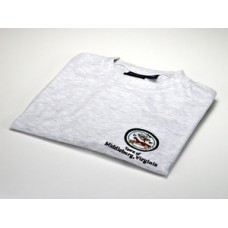 A great accessory to commemorate your visit to our lovely town or to simply boast your hometown pride!

Size:
Available in Adult Small and in Children's Size 12

WELCOME TO THE TOWN MIDDLEBURG

Browse among the delightful array of quaint shops and inns. There are approximately 600 people currently residing in the town.

Established in 1787 by Revolutionary War Lieutenant Colonel and Virginia statesman, Levin Powell, he purchased the land for Middleburg at $2.50 an acre from Joseph Chinn, first cousin to George Washington. Previously called "Chinn's Crossroads," Powell chose the name Middleburg because of the town's location midway between Alexandria and Winchester on the Ashby Gap trading route (now Route 50).

Since the 1730s, Middleburg had been a staging point for weary travelers along the Ashby Gap Road. The legacy of the colonial era continues today at Middleburg's charming inns that provide first rate accommodations to visitors from around the world.

There are several inns located within the corporate limits, including the historic Red Fox Inn and Tavern. It is billed as the "oldest original inn in America". The Red Fox Tavern was a meeting spot for Confederate Colonel John Mosby and his Rangers. A century later, President Kennedy's press secretary, Pierre Salinger, held press conferences at the Red Fox in the Jeb Stuart Room.

Across the street is another gracious reminder of the past - the Windsor House Inn, circa 1824. During the Civil War, it was known as the Colonial Inn; and, was run by Catherine Broun. Although Catherine sympathized with the South, she generously served meals to Union troops at the inn as well when they occupied Middleburg in 1862.

After the turn of the century, Middleburg began welcoming a new wave of visitors that descended on the town for fox hunting and steeple chasing. The charming village soon earned a reputation as the "Nation's Horse and Hunt Capital," attracting prominent visitors from across the United States.

Serving as a host community for more than 250 years, it is no surprise that Middleburg has developed such a high concentration of fine inns, shops and restaurants.