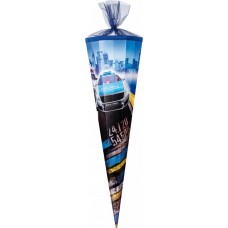 This special school cone has sound effects - at the press of a button hear the sirens on the police cars come alive! Limited quantity available so order now!

Made in Germany
Made of carboard, top lined in tulle
Supplies are limited so order now!

The custom that started in Saxony and Thuringia, but which was not adopted in other parts of the country was that the chlidren were not given their Schultuete directly. Marked with the students' names, they were taken to the school by parents or godparens and in a habit reminiscent of the Mexican piñata, hung on a metal "Schultueten-Baum" (School cone tree) from which each child had to pick their cone. Without breaking them, of course!