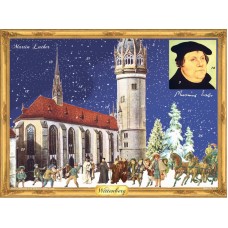 This unique calendar is a great way to commemorate the brave actions of Martin Luther.