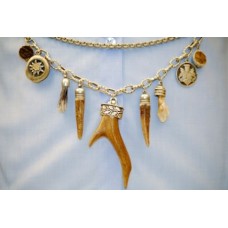 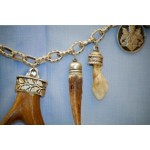 This piece is called a Charivari and in this case, it is a plated silver metal with traditional coins, antlers, and other German tokens. It is to be attached to a belt, and it then hangs in the front with a slight drape to it.

It certainly will separate you from the crowd at your local October Fest!

Historically these pieces were worn as either talismen (to ensure success for the hunters who wore them) or simply as adornment, originally designed for men. Today they are worn by men and women alike.

These were considered status symbols in the 19th century. One was not to sell the old Charivaris, but was expected to hand the old ones down from one generation to the next!

Another note:
These pieces are all hand made, so your piece will vary slightly from the one shown in the photograph.

Elegant and fun.
Made in Germany.