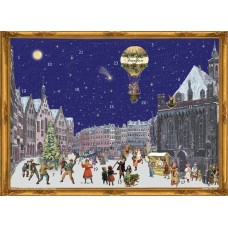 This lovely calendar depicts a charming winter scene in the wondrous city of Frankfurt, Germany.