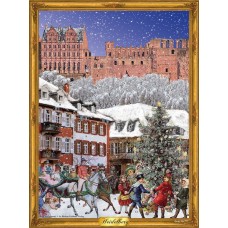 Product Code: a777
Availability: TEMPORARILY OUT OF STOCK
Price: $8.00

** Richard Sellmer has updated their beloved "Old Heidelberg" calendar with a new, fresh look for 2017! **

The windows are illuminated when the calendar is placed before lights.