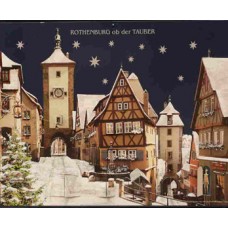 This Kreuter German Paper Advent Calendar is of Winter scene of the framework houses of Rothenburg with the neighboring tower.

Rothenburg ob der Tauber is a town in the district of Ansbach of Mittelfranken Middle Franconia), the Franconia region of Bavaria, Germany, well known for its well-preserved medieval old town, a destination for tourists from around the world. In the Middle Ages, it was an Imperial Free City. A significant fraction of Rothenburg is car-free.

The name "Rothenburg ob der Tauber" means, in German, "Red fortress above the Tauber". This is so because the town is located on a plateau overlooking the Tauber river.

As to the name "Rothenburg", some say it comes from the German words Rot (Red) and Burg (burg, medieval fortified town), referring to the red colour of the roofs of the houses which overlook the river.

The name may also refer to the process of retting ("rotten" in German) flax for linen production.